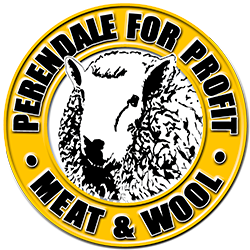 The Perendale is a dual purpose (meat and wool producer) maternal sheep breed, developed at Massey Agricultural University in the North Island of New Zealand in the late 1950s by Professor Sir Geoffrey Peren.

It is the result of the ongoing development by Professor Peren with the Romney breed, which originated from the Romney Marsh in the English county of Kent. The Romney was introduced to New Zealand in 1853 and was the predominant sheep breed farmed for over a century.

The introduction of the Cheviot breed to New Zealand from the Cheviot Hills on the border region of Scotland occurred in 1857 in the hope to further improve their sheep production returns. Nearly a century later the desire for the development of various traits in their commercial sheep flocks saw success result from a Cheviot/Romney cross to arrive at what is now the modern Perendale breed which was officially founded in 1956!

Since its inception, the Perendale has become one of the top breeds in New Zealand. Numbers exceed six million with many flocks in excess of 10 thousand.

Given all the current variations in sheep farming here in Australia, the reality of the Perendale sheep being an easy care breed is now more important than ever and will provide the producer with effortless lambing, excellent fertility, mothering and survival, general hardiness and the ability to survive under difficult conditions. They have a tolerance to worms (less drenching, reduced costs), free of wool on their face (no wool blindness), no wrinkles on their breach (no mulesing), are very herd centred (easy shepherding and less/no dog), they are bright and alert, robust and highly productive sheep.

Perendales are able to offer the farmer a rugged dual purpose flock capable of producing quality, fast growing, prime lambs and a medium white wool fleece sought after for its bulk in the spinning and weaving trades for applications such as carpets and aeroplane interiors.

They offer advantages in biosecurity  the highly fertile ewes are able to produce great lambs, allowing the producer to keep the ewe portion as replacements with the wether and excess ewe portions to be sold. This ensures there is reduced need to buy in sheep, which has huge savings for the producer.

The Perendale breed is enjoying increasing popularity and the Australian Perendale Association's work includes membership of commercial and stud breeders, networking, education and information sharing, plus marketing of the breed.

The Australian Perendale Association has its own Committee of Management (contact us) and regular meetings. It is also closely affiliated with the Australian Stud Sheep Breeders Association with branches active in each state (see www.assba.com.au)